Avoid cheap parts, especially if mechanical. Invest in quality, you always get what you pay for. Otherwise your entire system might later develop intermittent faults.[18][19] Vertical mount front panel components will need to of a similar height to neatly fit the gap between the PCB and front panel.

In order to construct low profile Eurorack modules vertical mount components are required. These allow the PCB to be mounted parallel to the front panel, keeping module depth to a minimum.[20]

These are not 1/8 inch but are 3.5mm.[21] Popular brands of vertical mount 3.5mm mono jacks for Eurorack are Cliff (used by Doepfer), Erthenvar aka Flight of Harmony, Kobiconn (used by Cwejman, Make Noise, Malekko and Metasonix) and Switchcraft. These are available switched (for normalisation) and unswitched.[22][23] Erthenvar 3.5mm vertical mount jacks with a thread diameter about 5.9mm (0.232"), will fit well with panel drill holes of 6.0 to 6.5mm diameter.[20], Erthenvar</ref>[24][25] Suppliers: 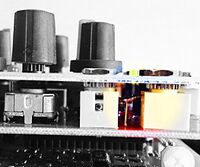 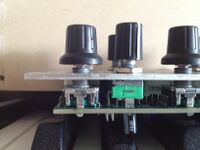 These days Eurorack modules tend to mount the PCB parralel to the front panel, held in place by the pots, jacks and switches.[9] Modules with wired front panel components cost more to manufacture than PCB mounted, however these electro-mechanical components have limited lifetimes and while PCB mounted parts can be repaired it's not as easily as wired components. Also PCB mounted components mean the board is designed around specific parts. If any of these parts goes out of production the modules have to be redesigned, with the additional cost of updating the PCBs.[22]

To fit between the mounting rails the maximum vertical PCB size can be from 108mm (4.25") to 110mm. The width of the PCB needs to be a touch less than that of the front panel, whilst allowing for clearance and taking tolerances into consideration.[3][9][20]

Stacked PCBs can be connected with standard 0.1" single and double row male/female pin headers. These combine to a height of 7/16 inch or 11mm and boards can be mounted to each other with spacers of this length.[27]

Don't use tools you value highly, the headers are made of brittle glass filled epoxy which will damage the edge of any blades used to cut it. To get the single row male headers to length, grip the last pin of the length you want firmly in pliers and snap the rest off. The female headers don't snap easily so first pull the pins out of the body at the point where you want it to snap, then file the ends smooth. Alternately combine smaller lengths to make up the length required. To get them to butt against each other at 0.1" if there is extra plastic on the ends file it down.[27]

Suitable parts can be purchased for example:[27]

Do not mix terminals and headers made of different metals. With dissimilar metals the contact resistance will go up, causing all sorts of problems.[28]

Analogue Systems uses 16 pin DIL sockets (IC sockets, with two rows of 8 pins). All pins connect to the ribbon cable. The Doepfer and AS methods are not compatible without some sort of converter.[31]

Retrieved from "https://sdiy.info/w/index.php?title=Eurorack_parts&oldid=2977"
Categories:
Cookies help us deliver our services. By using our services, you agree to our use of cookies.