(Difference between pages)
Jump to navigation Jump to search

For generating and modifying sound, the typical synthesizer patch is VCO-VCF-VCA, linked in series, with suitable control from keyboard, sequencer, or computer. The VCO generates the raw sound, the VCF dynamically varies the timbre (sound quality). and the VCA controls the amplitude and produces the envelope on the sound event. The Serge Modular WAVE MULTIPLIERS (VCM) provide a new link in this chain, representing an advance in synthesizer technology. In this typical patch, the Wave Multiplier could be placed just before the VCF. Like the VCF. the Wave Multiplier affects the timbre. Unlike the VCF, whose action is a subtractive process of filtering frequencies from the input waveform, the Wave Multipliers are able to dynamically process the input waveform to produce new harmonically-related overtones. This function should not be confused with Ring Modulation, since it is a non-linear process using a single audio input. Although it is possible to describe the effect of a VCF by saying the sound gets "bass-heavy", makes a "wah-wah" effect, or sounds "thin" to describe the sound of a Wave Multiplier is much more difficult. The input sound comes out richer in harmonics, somewhat similar to pulse-width modulation and to linear frequency modulation, but with a new characteristic timbre. The nearest we can come to describing the unique sound qualities (there are three different sections) is to say that they alter the timbre in exciting new ways, producing interesting alternative forms of signal processing which are unique in the Serge Modular Music System. Since there are three entirely separate and different types of Wave Multipliers in this module, an enormously varied palette of new effects can be synthesized.

The uppermost section is the simplest of the three multiplier sections. but it has two switchable effects. With the switch set at the "HI" position, the module functions to "square-up" an incoming signal. This is not the same as a simple comparator squaring function, though, since there is a rounded flattening of the signal peaks: an effect somewhat similar to overdriving a tube amplifier (except that in this version the process is voltage controllable!). With the switch in the "LO" position, the module is a linear gain controlled VCA. This is useful for various functions such as amplitude modulation and for gating signals into the other sections.

The middle Wave Multiplier provides a sweep of the odd harmonics (1, 3, 5, 7, 9, 11 and 13th) when a sine wave is applied to its input and the knob is turned up or a control voltage is swept from low to high. This effect is similar to overblowing a wind pipe closed at one end, and thus the module can be used to produce the sounds of various wind instruments. A second input is included to allow two signals to be mixed before processing, a technique that we have found to be very usable. This module can be used to explore timbral areas beyond the range of ring modulation because there are more varied harmonics than the sum and difference tones.

The bottom Wave Multiplier performs non-linear waveshaping known as full-wave rectification, but with sophisticated level-compensating conditioning as well. Actually the circuit uses three full-wave rectifier sections linked in a very refined controllable format. Each section can double the frequency of a sine or triangle wave applied to its input. Thus sweeping the VC input over its range will produce a smooth timbral transition using the even harmonics (second, fourth, and eighth). Many other partials are present in this basic sound, however, and the sonorities are very rich and varied. A notable feature of this multiplier is that the full-wave rectification is not accompanied by a reduction in the output amplitude. There is no alteration of the essential level of the sound. There are two inputs to provide mixing before processing, and two outputs. One output is a "squared up" version of the other. This output resembles voltage controlled pulse width modulation (only much more interesting). The Wave Multipliers are among the most powerful timbral modifiers available on any analog music synthesizer. The rich varieties of inter-patch possibilities are nearly inexhaustible, and these possibilities combined with the flexibility of other Serge modules will provide unique synthesis tools for the person who is eager to experiment with entirely new classes of sounds. The Wave Multipliers provide what has too often been lacking in electric musics. a means of generating sounds as complex and dynamically variable as those found in acoustic sound sources. Yet these are also precision modules which respond accurately to control voltages, so they may be used to give repeatable results in the most exacting analog or digital applications. 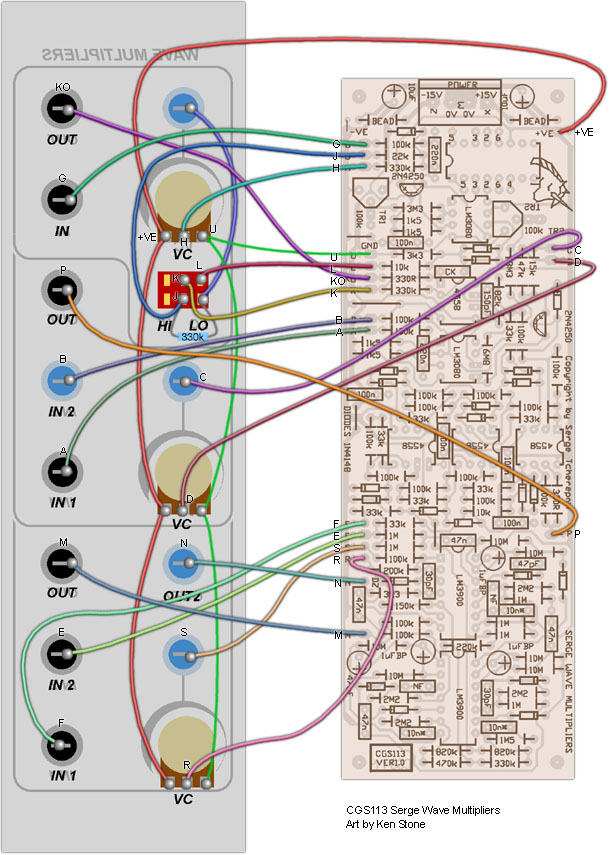 Click on a date/time to view the file as it appeared at that time.

You cannot overwrite this file.

The following page uses this file:

Retrieved from "https://sdiy.info/w/index.php?title=File:Cgs_schem_cgs29_v20_wave_multiplier.gif&oldid=15677"
Category:
Cookies help us deliver our services. By using our services, you agree to our use of cookies.