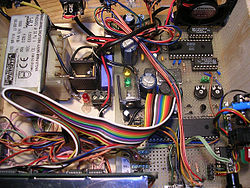 The Elektor Elektor Formant design was published in 1977/78,[6] also modular and based around Moog Modular styling. Another early ETI design was the International 4600 and its descendants, the 5600 and 3800 synths, which were distributed as kits by Maplin Electronics. The 4600 and the 5600 featured a pin matrix for patching similar to that of the EMS VCS3, only larger. However, these synths proved overly complex for the amateur constructor.[2]

Retrieved from "https://sdiy.info/w/index.php?title=Synthesizer_do_it_yourself&oldid=21211"
Categories:
Cookies help us deliver our services. By using our services, you agree to our use of cookies.