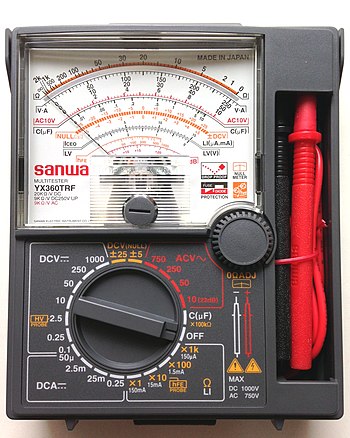 A Sanwa YX360TRF analog multimeter.
Units of measurement commonly used in electronics can be very large or very small.

In the metric system instead of using a lot of zeros the quantity is given a metric prefix. Converting from one unit to another is done by simply moving the decimal point.

The most common SI units in electronics

There are other SI units in electronics, this is a list only of those most likely to come up in practical experiments. The units with capitalised symbols are named after significant people.

The metre (m)
The unit of length. In the USA and Phillipines spelt meter. Usually in use as decimal fractions of a metre, as centimetres (cm) or as millimetre (mm) and fractions of mm e.g. stripboard holes are spaced at 2.54 mm intervals.
The ampere or amp (A)
The unit of electric current. Usually used in amps or milliamp (mA) e.g. a 780x voltage regulator rated at one amp.
The volt (V)
The unit for electric potential. Measure differently for DC or AC but in the range of volts and millivolts (mV) e.g. a 9 V PP3 battery.
Ohms (Ω)
The unit of electrical resistance. In electronics also with the symbol R. As resistors usually encountered in ohms through kilohms to megaohms, often with the unit instead of the decimal point. e.g. 4R7 for 4.7 ohm or 1k5 for 1.5 kilohm.
The watt (W)
A unit of power. Most often measures of milliwatt e.g. a laser pointer outputs about five milliwatts of light power. Audio signals and other electronic signal levels are often measured in dBm, referenced to one milliwatt.
Farad (F)
The unit of electrical capacitance. Capacitors range in value from a few picofarad (pF) through nanofarads (nF) to microfarads (μF) and sometimes the same value can be specified in one multiple or another e.g. 0.1 nF or 100 pF for the same value ceramic decoupling capacitor.
Henry (H)
The unit of electrical inductance. For coils usually as microhenries (μH) e.g. a radio tuning coil might have an inductance of a few tens of microhenries.
Hertz (Hz)
The unit of frequency. From DC which is 0 Hz through to to microwaves which are in the gigahertz range e.g. the audio range is ideally from about 20 Hz to 20 kHz.

Depending on who you speak to PCB designs are specified with "thou" or "mil", e.g. “ten thou spacing” or “a 25 mil grid”. A thou or mil is thousandth of an inch. To avoid confusing mil with millimetre avoid using the term mil and use thou. PCB design uses both imperial inches and the metric millimeter. As a general rule thous are used for tracks, pads, spacings and grids, while mm are for mechanical requirements like hole sizes and board dimensions. Most through hole components have a tenth of an inch (aka 0.1") pin spacing, that's 100 thou or 2.54 mm.[1][2]

Retrieved from "https://sdiy.info/w/index.php?title=Units_of_measurement&oldid=17857"
Categories:
Cookies help us deliver our services. By using our services, you agree to our use of cookies.