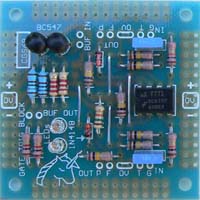 While CGS69 the CGS dev-mod gate/trigger block development module does replicate the CGS gate to trigger converter to some extent, the intended use is a little different. When prototyping new designs, on frequently fines the need to build certain component blocks over and over again. The options are simple - waste time doing it again, waste a good board to use the subsections that are required, or use something like this, that can be easily salvaged after each use. If course there is nothing to prevent it becoming a permanent part of a one-off design either.

The schematic for the Gate/Trigger Block.

Each of the blocks is functionally identically and can be configured in several ways. First there is a comparator and its associated network designed to convert a positive going signal into a positive going gate signal (detection point is around 1.5V)). The range of this signal can be -VE to +VE (less a couple of volts) or 0V to +VE.

A couple of extra components (resistor and capacitor) allow the blocks to be used as gate to trigger converters that to correspond to positive going transitions. The exact detection point depends on rate and level of voltage change - for example a rapid change from -10V to 0V would trigger it just as readily as one that changed from 0V to 10V.

Note that it is NOT possible to use a block as both a gate detector and a trigger converter at the same time. One input OR the other must be chosen. As there are two blocks on the PCB, if you require both functions at once, use one as a gate detector and the other as a trigger converter. If you are not planning to use the trigger function, omit the 10n and the corresponding 100k pull-down resistor.

There are also two uncommitted output buffers to drive either directly from the "P" positive outputs, for stand alone use, or from the outputs of whatever logic you add between.

The component overlay for the Gate/Trigger Block.

Decoupling capacitors are mounted directly one the rear of the PCB under the chip. You can use surface mount devices, or with a little lead bending, monoblock ceramics.

The LED resistors (RL) can be selected as needed. If you are using common LEDs, 1k to 2k2 would be appropriate. If you are using any of the super-bright modern LEDs for their unique colors, the resistors can be much higher, 10k to 33k for example, so that the LEDs don't dazzle you.

If you need to increase the output swing of the buffers, change the values of the 1k8/1k resistors used in the divider.

Around the edge of the board are rows of pads suitable for adding headers to allow dev-blocks to be linked together using the CGS72 joiner or plain old pin header jumpers. Apart from the power rails, these are not assigned, so as to allow maximum versatility. You will need to link these pads to the inputs and outputs of the circuit blocks as required.

Retrieved from "https://sdiy.info/w/index.php?title=CGS_dev-mod_gate/trigger_block&oldid=16574"
Categories:
Cookies help us deliver our services. By using our services, you agree to our use of cookies.