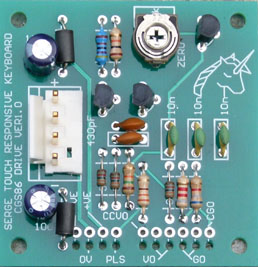 Note that by itself, this project can only provide Gate signals and voltages responding to pressure being applied to the pads. There are no musically pitched voltages generated. That must be handled by external circuitry such as the Programmer/Sequencer.

This keyboard may be made with as many keys as you like, though the value of RPD (15k) may have to be made smaller as more keys are added. Each key provides for touch proportional voltage and pulse outputs. The pulse output stays high for however long the key is touched. In the schematic, each stage's touch voltages are combined through a diode network resulting in an output dominated by whichever key is touched hardest. This function is optional, but is useful if you wish to use the keyboard (in conjunction with Programmers) to play melodies with touch control of their dynamics.

The keyboard may be built and installed to fit any flat surface, for example, the body of an electric guitar. Make sure that all components are mounted in close quarters with the touch keys. Wiring should be kept tight. Note that the pattern surrounding each key should be grounded. Connecting your touch responsive keyboard with a Programmer will result in an exceptionally powerful unit, able to access as many presets as you want at a touch. This means too, that your keyboard will be able to perform non-tempered scales since each of the keys can be preset to a different tuning.

On the CGS86D Driver PCB: The transistors make up an emitter coupled astable oscillator with a somewhat distorted square wave output of about 100kHz.

On the CGS86 Detector PCB: The first amplifier for each of the two stages shown a full wave rectifier and filter whose output goes positive as more of the 100 kHz is shunted to ground by touching a key. The second amplifier provides the pulse output.

The circuit may be operated with +/-12 or +/-15 volt supplies, although the output voltages will be higher on the higher supply voltage.

The schematic of the Serge Touch Responsive Keyboard. The portion to the left is on the sub board CGS86D, while the touch-pad detector circuits are in groups of eight on the CGS86. The touch-pads themselves are on the CGS86PAD PCB.

There are two 3mm holes on the CGS86 so the CGS86D driver board to be mounted on it. This is best done after the wiring to the boards has been completed.

A 330pF and 100pF in parallel can be substituted for the 430pF capacitor. Install the 330pF in the location marked 430pF on the PCB. Install 100pF in the unmark location immediately beside it.

There are not connections to be made to the front of the CGS86PAD board. The touch-pads themselves are connected via four through-plated holes to a centrally solder pad on the rear of each touch-pad. These pads should line up with holes on the standard one-inch grid used on Serge style Panels. The smaller, nearby pad is for the earth/shield connection. Only one of these pads will be used. It does not matter which one. You may need to drill an extra hole for it. The rectangular pads are possible LED connections, with one of each pair being grounded for common cathode use. It would probably be more convenient not to use these LED mounting pads, due to the difficulty of keeping the connections flush so they don't short to your panel. Instead it would probably be more satisfactory to connect the LEDs to wires or some other carrier PCB on the other side of the panel to which you stick the touch-pad board. The easiest way to mount the CGS86PAD board to your panel is with double sided tape.

There is provision on the CGS86PAD board to allow for LEDs. These will need to be driven by external circuitry, such as the Programmer/Sequencer. If you wish to use the Touch Responsive Keyboard without external circuitry, ultra bright LEDs could be driven via a 4k7 or 10k resistor directly from the GATE outputs of the individual detectors. 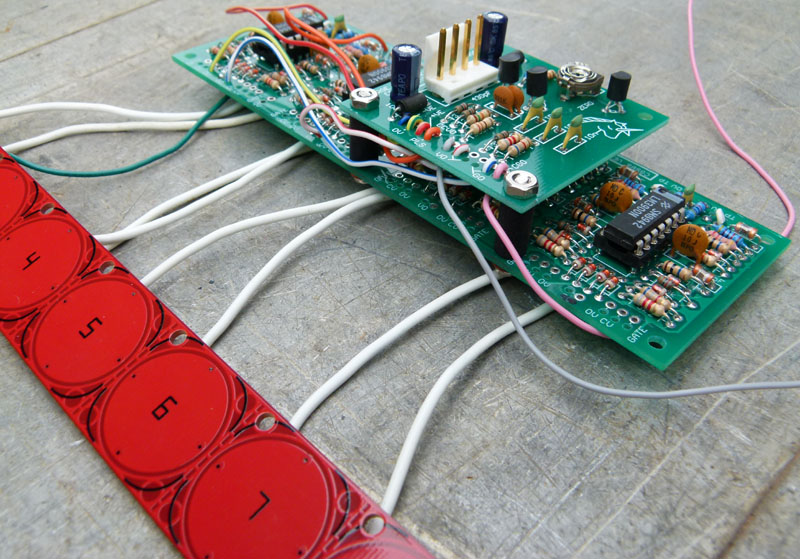 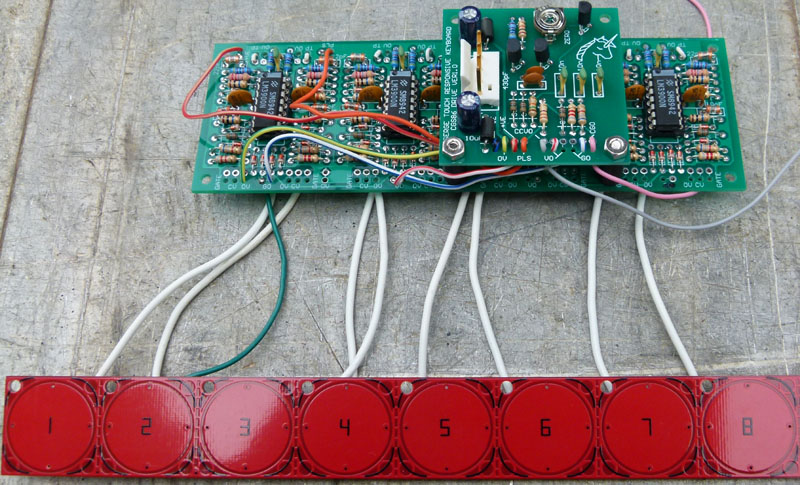 Example wiring for stand alone use.

With no keys/touch-pads being touched, the 10K trimmer should be adjusted for zero pulse and voltage outputs at zero touch tor all keys. To do this, monitor the CVO PRESSURE CV OUT pad. Twist the trimmer until you have a reading greater than 0V, then back off until it drops to 0V (give or take a few millivolts). Below this point the trimmer will have no apparent effect during set up, but would affect playability. Check that CGO GATE OUT is at 0 volts. Check that touching each pad gives a voltage out on CVO proportional to how hard you press the pad, and that CGO goes high.

Retrieved from "https://sdiy.info/w/index.php?title=CGS_touch_responsive_keyboard&oldid=15567"
Category:
Cookies help us deliver our services. By using our services, you agree to our use of cookies.