Electronotes/AN-23 - The CA3080 as a voltage-controlled resistor 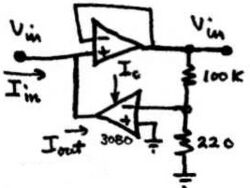 Fig. 2b.jpg
In AN-22, we looked at the CA3080 operational transconductance amplifier (OTA) as a voltage-controlled gain source. Here, we will use these previous ideas as a jumping-off point to see how the CA3080 can be made to act like a voltage-controlled resistor (VCR). In these applications, the CA3080 is used in its linear mode, so signals at the actual input pins are limited to (generally attenuated to) ±10 mV. In the cases below we will not be showing the actual circuitry that controls the control current (

) of the CA3080, but the reader can consider this circuitry to be similar to that shown in AN-22. The fact that the CA3080 could look like a resistor is implied by the name "transconductance" and can be seen by writing the basic equation for the CA3080 as:

We can thus look at the circuit of Fig. 1a as a form of a voltage-controlled resistor. If we rewrite equation (1) a little we get:

, and where we have made use of the values shown for the voltage divider attenuator. What kind of a VCR is this? Well, we can see that the ground point receives current as though it were being supplied from a voltage

is shown in Fig. 1b. However, this is not a load resistor since the actual load presented by the VCR is always 100,220 ohms. Thus, it is a resistor from an input as seen from ground. If we consider the standard inverting amplifier circuit of Fig. 1c, which has gain

, we can see that if we put this VCR in place of

, we get the gain control of AN-22 from a different point of view. This is shown in Fig. 1d. This is a very useful VCR and finds many applications such as in the voltage-controlled integrator shown in Fig. 1e. Two of these VC integrators and an op-amp summer can be used to form a VC state-variable filter, which is very useful as a basic voltage-controlled filter block.

Next we would like to look to see if we can make a VCR that looks like a resistive load. That is, we want to have a VCR that actually draws different currents depending on the voltage across it - which after all is what a real resistor does. This can be implemented as shown in Fig. 2a. Ignore for the moment the upper op-amp in Fig. 2a, which is just a voltage follower to drive the attenuator on the input of the CA3080. The output of the CA3080 is thus

which is the same thing we had above. But here the current is drawn from the input (

) so the VCR looks like a resistor to ground, as seen in Fig. 2b. We can thus use this sort of VCR to implement the high-pass filter structure shown in Fig. 2c. The implementation is shown in Fig. 2d, and the 3dB frequency is

Since we have implemented the simple R-C high-pass filter (with an output buffer), it is of interest to ask if the corresponding R-C low-pass filter can be realized. It might at first seem that the VCR of Fig. 1a would be the answer, but if we look at this closely we see that it supplies a current that is indeed proportional to an input voltage, but the other end is always taken to be ground, while in the simple R-C low-pass, the voltage "x" (see Fig. 3a) is not in general zero. Thus, we need a VCR which sees two voltages,

, and the voltage "x" which is the same as the output voltage. The circuit of Fig. 3b is the proper realization. This is easy to show.

This can be compared with the same equation for the circuit of Fig. 3a where the current through the resistor is given by:

Thus we have implemented three types of VCR's. The first (Fig. 1a) is useful for supplying current to a ground potential. The second (Fig. 2a) is useful as a resistor to ground. The third (using the differential input arrangement of which Fig 3b is an example) is one form of a floating resistor.

A more general form of a floating resistor is shown in Fig. 4, and is a circuit first suggested by G. Wilcox.

, and thus the two CA3080's are effectively out of the circuit. The resulting resistance between

is flowing in both CA3080's, it can be shown that the current I is given by:

Thus, as the current

is increased, the effective resistance goes down, starting from a value of 200k (or whatever attenuator is used). For a completely linear system, the circuit of Fig. 5 can be used to get rid of the

Retrieved from "https://sdiy.info/w/index.php?title=Electronotes/AN-23_-_The_CA3080_as_a_voltage-controlled_resistor&oldid=2499"
Categories:
Cookies help us deliver our services. By using our services, you agree to our use of cookies.