This information is for doing DIY, re-paneling, and/or repairs on Euro systems. It's not comprehensive, everyone has preferences, but lists the common, major or most-wanted parts in the Eurorack format, and/or what sort of things will work. 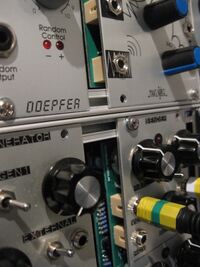 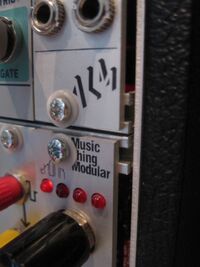 Eurorack panels mounted on Vector rails, with sliding nuts.
Unless attaching the panels directly into the wood of an enclosure; Doepfer aluminium mounting rails from Schroff or Gie-Tech usually have a 1.2mm lip and are fitted with a number of square nuts or a threaded strip with M3 tapped holes, spaced with 5.08mm between centres.[12] Be careful not to get Schroff rails that take M2.5 screws.[13] Vector T-Strut rails do not have a lip and take a M2.5 threaded strip or 4-40 square nuts.[14] Nuts are more fiddly than threaded strip, but the modules can then be butted flush against each other, for example when Analogue Sytem and Doepfer-style modules share the same rack rails.[15]

For small panels it's cheapest to buy Doepfer pre-made blank panels. For wider panels it might be worth getting them done by Frontpanel Express, without labeling and with whatever holes are required. Getting aluminum cut by general online metal suppliers is going to deliver metal that is approximate in size and the edges will need filing down to get it to the correct size.[19]

These days Eurorack modules tend to mount the PCB parralel to the front panel, held in place by the pots, jacks and switches.[9] Modules with wired front panel components cost more to manufacture than PCB mounted, however these electro-mechanical components have limited lifetimes and while PCB mounted parts can be repaired it's not as easily as wired components. Also PCB mounted components mean the board is designed around specific parts. If any of these parts goes out of production the modules have to be redesigned, with the additional cost of updating the PCBs.[20]

Stacked PCBs can be connected with standard 0.1" single and double row male/female pin headers. These combine to a height of 7/16 inch or 11mm and boards can be mounted to each other with spacers of this length.[22]

Don't use tools you value highly, the headers are made of brittle glass filled epoxy which will damage the edge of any blades used to cut it. To get the single row male headers to length, grip the last pin of the length you want firmly in pliers and snap the rest off. The female headers don't snap easily so first pull the pins out of the body at the point where you want it to snap, then file the ends smooth. Alternately combine smaller lengths to make up the length required. To get them to butt against each other at 0.1" if there is extra plastic on the ends file it down.[22]

Suitable parts can be purchased for example:[22]

Do not mix terminals and headers made of different metals. With dissimilar metals the contact resistance will go up, causing all sorts of problems.[23]

Analogue Systems uses 16 pin DIL sockets (IC sockets, with two rows of 8 pins). All pins connect to the ribbon cable. The Doepfer and AS methods are not compatible without some sort of converter.[26]

LC filter to further reduce the amount of output ripple and transients on a switching PS.
A good clean power supply unit (PSU) is the most important part of a modular system. A proper linear power supply and good distribution makes a big difference to the stability and sound quality of the system.[30]

Switch-mode power supplies (SMPS) are smaller, lighter, and much more efficient (give off less heat) than linear power supplies but produce noise, (above the audio range) on their output.[31] About 1% of the output voltage of a switching power is a sawtooth ripple at the switcher frequency. Due to the fast output switching and the parasitic inductance of the output filter capacitor there may also be short voltage spikes at the peaks of the sawtooth. Use low inductance capacitors with short leads to minimize these voltage spikes. Adding a small LC filter to the output can further reduce the ripple and transients to a tenth of their level.[32]

Mains voltages can kill and capacitors in disconnected power supplies can still deliver quite a jolt. Unless you're qualified to work with mains electricity ready made external transformers are safer.

This page has been split to Eurorack panel components on 22 April 2016. The history of this page serves as the attribution history for the contents of that page, before then.

Retrieved from "https://sdiy.info/w/index.php?title=Eurorack_parts&oldid=19238"
Categories:
Cookies help us deliver our services. By using our services, you agree to our use of cookies.